The new flagship at breaker price of Xiaomi. If the new Mi6 is the last of the last of the Asian technological giant that presents us with a smartphone even more complete if after a few months ago he will remove Mi Note 2 and the exclusive Mi Mix. In Mi have not been idle after the Mi5 in three different versions, and which has been one of the stars of 2016 as well as its variant Mi5S and Mi5S Plus have also been. Now we are facing a brand new smartphone, with very succulent developments both on the screen and internally, as it brings us the new processor from Qualcomm, as well as a battery of extensive duration. 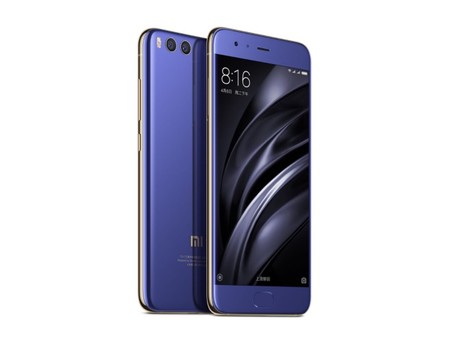 And it is that Xiaomi has done it again, yes. Its design returns to enchant us thanks to a renewed style within the own line of Xiaomi that we love to lovers of smartphones. It is very likely that we find a smartphone made partly aluminum and part crystal, being aesthetically a mobile that hits us with a look, love at first sight for sure. The back part is again composed in 3D Form, which was a success in the Mi5 for its comfort and aesthetics. In addition we will have the possibility of using a very interesting novelty, the unlocking of the terminal using the Ultasonic fingerprint sensor, which is located below the central button, thus achieving an improved and more accurate response with your fingerprint when unlocking your phone Mi6. A highlight that has highlighted Xiaomi’s new smartphone is resistance to splashing water, a very fresh novelty. We will have a great battery of 3350mAh, almost like the one that already has the Redmi 4, so we will not have to worry about the autonomy, aspect that other mid-range smartphones can be worrisome at this point. As for colors we will have the possibility to choose between Bright black, electric blue and white, we will also have two others in its Ceramic version of 64GB, in black and white.

The Full HD screen has arrived to stay in the high range of Xiaomi, or at least for now, because in the Xiaomi Mi6 we will have a panel of 5. 15 inches in size with crystal 2.5D Curved on its sides, which not only Adds a design plus, but allows a greater angle of vision, which translates into rest for your eyes. The resolution of screen is Full HD, finding high resolution images very sharp and with a high color contrast, as well as a refresh rate of image as if you were not in front of a screen, naturalness assured in your hands. As an extra protection, Xiaomi’s new top of the range features the latest in glass for screens, the Corning Gorilla Glass 4, with even more safety against scratches.

As we enter the guts of the new Mi6 we will find Qualcomm’s newest processor to carry the flagships of 2017, the SnapDragon 835 !, which is 30% even more efficient than its predecessor. And is that this new unit of processing of 10 nanometers is arranged in four Kryo cores 280 to 2.45 Ghz and other four to 1. 9 Ghz, the biggest power of the market so far, achieving at the same time an energy saving of 40 % Vs. SnapDragon 820. The graphics processing unit, or GPU, is an Adreno 540, so it supports 4K Ultra HD (HDR10), 3D audio and 6DoF video playback. If you have already been impressed, wait, there is still more, because in this model that you find now you will have 6GB of LPDDR4X RAM dual channel and an internal memory of 64GB, which will give you plenty of space for all your files, as well As a fluidity never seen before

Two 12 megapixel cameras are possible. You will undoubtedly count on Miui V8 with Android 7 Nougat while preparing the landing of Miui V9 that is on the way, so that we are before the most modern system of Android content in the interface so famous already of Xiaomi. And there is the thing there, because we have NFC connection, fingerprint reader to lock / unlock smartphone, GPS positioning GLONASS connection accurate. You will also have high-speed 4G connection, compass, WiFi a / b / g / n / ac with possibility of WiFI Display and WiFi direct, as well as connection to 5Ghz networks thanks to the connection technology that includes its MU- Bluetooth 4. 2 with low power profile.

It is proven that Xiaomi is unique and different and knows how to surprise us as it has done when buying Xiaomi Mi6.